I invited a few girlfriends for lunch today and one of them suggested we do broom casting.  Two of the ladies took a class recently and the other two (myself included) were intrigued by the concept and willing to give it a try.

With a new crucible, the first step is to flux it. 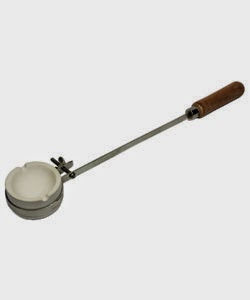 First lesson:  "do not add borax (flux) until the crucible is very hot" or else it will fly everywhere. Makes sense, right - LOL

I retreated to my bench to do the deed.  Once I heated the crucible, I added a little borax (flux) to coat it.

My first casting was using brass (copper for my second).  It took forever to melt, even with the addition of an additional torch. There was more success with the brass casting vs. the copper (exact opposite of what I expected).

Not sure if the type of fuel is important, but I used mapp gas which could have been part of the problem, along with a slight breeze.

I made one in silver one (scraps and discarded pieces donated by my friend) but the results weren't too great.  We did it several times and the cast was still thin and sparse. 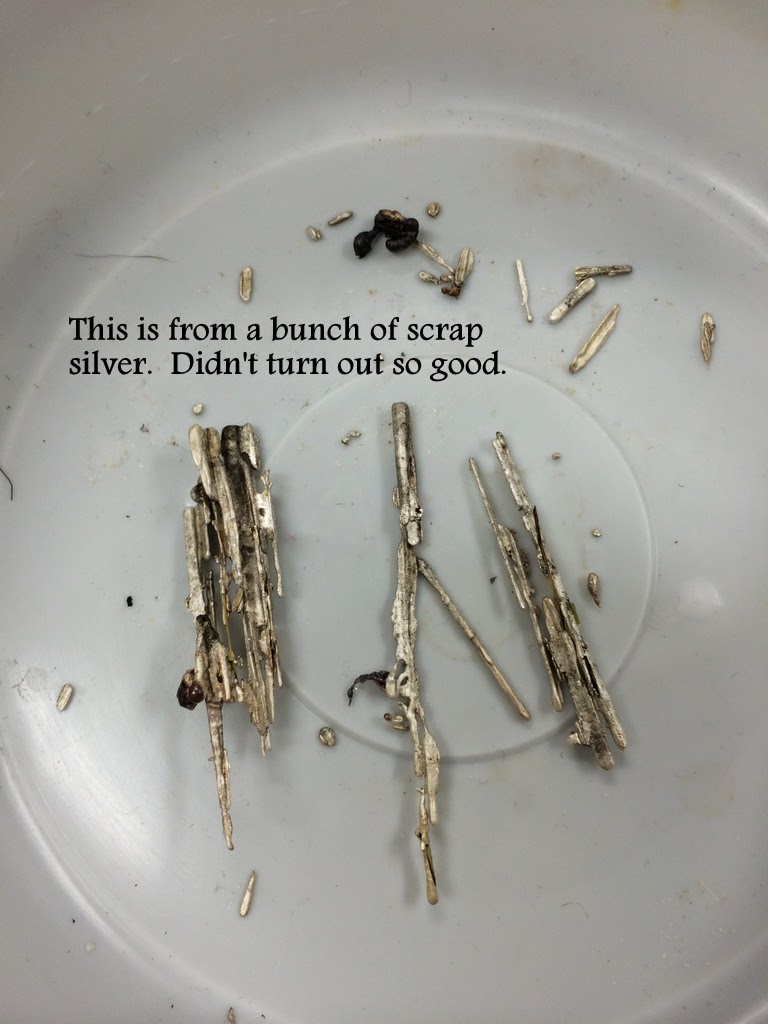 Not to be defeated, we tried once again. This time we used my air acetylene torch in the studio.  I was a little nervous mind you but decided to do it anyway.
It was a tad batter but not a big heavy pieces.
Was this due to not having enough silver?
Would Mexican silver make a difference?
Does the type of fuel used make a difference?
It is very lacy looking which is appealing. 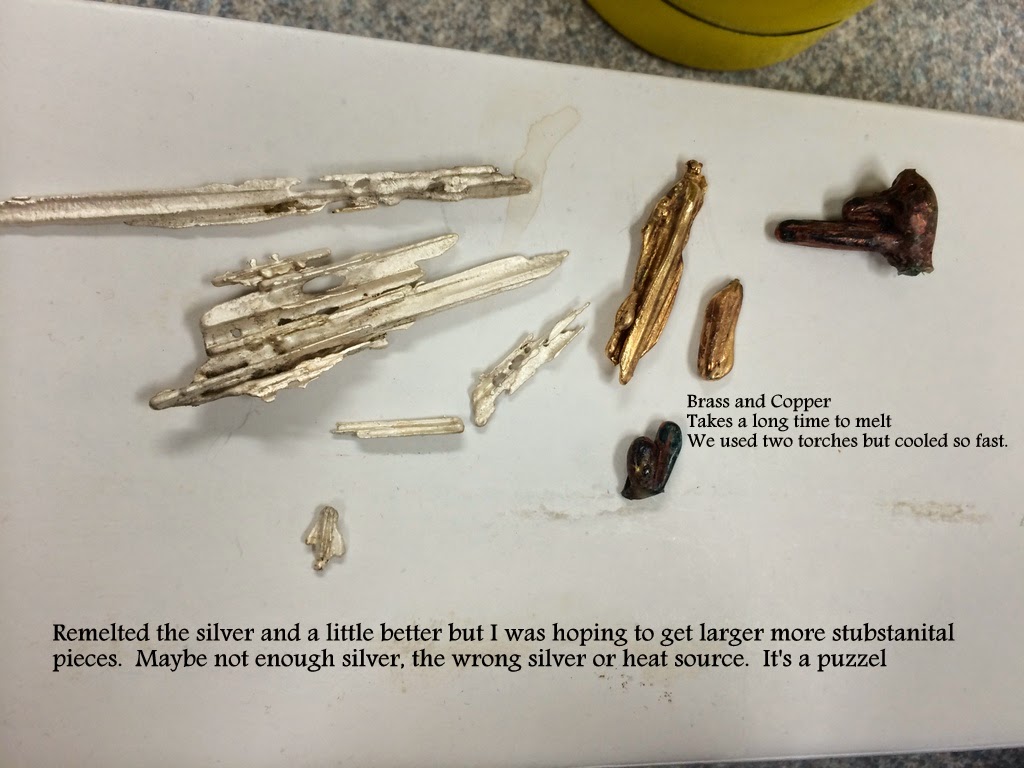 Here are the pieces my friend made previously.
She used straw, beans (garbanzo) and large rock salt.
The ending pieces turned out beautifully.
After time in the tumbler, they are all shiny and new. 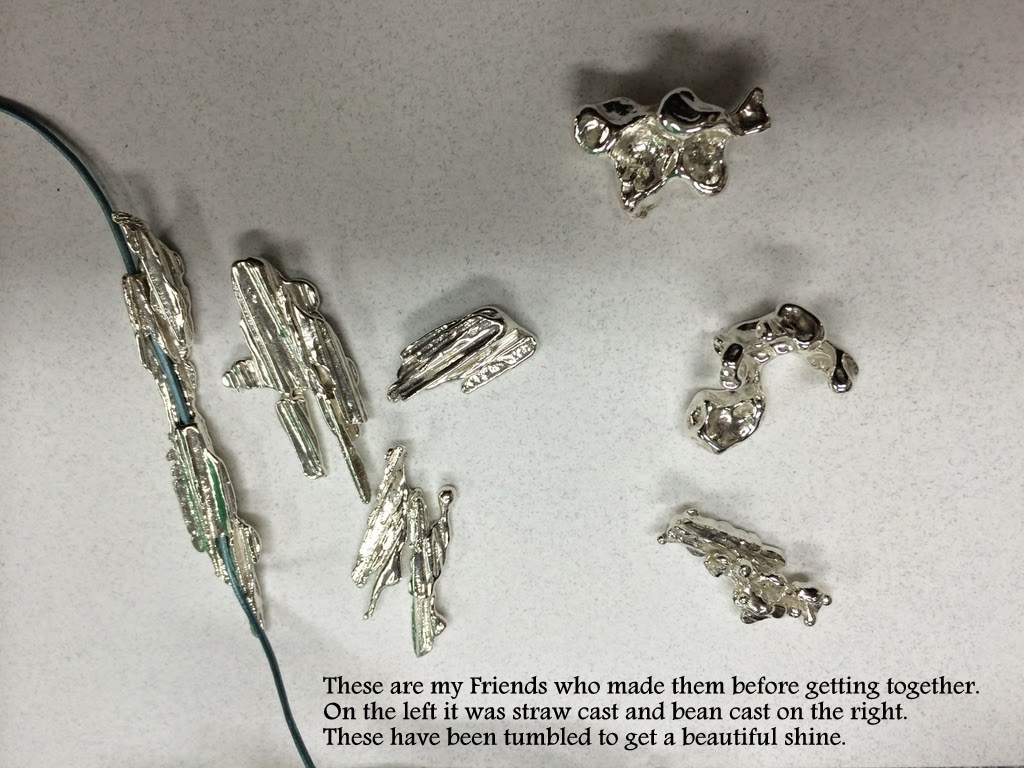 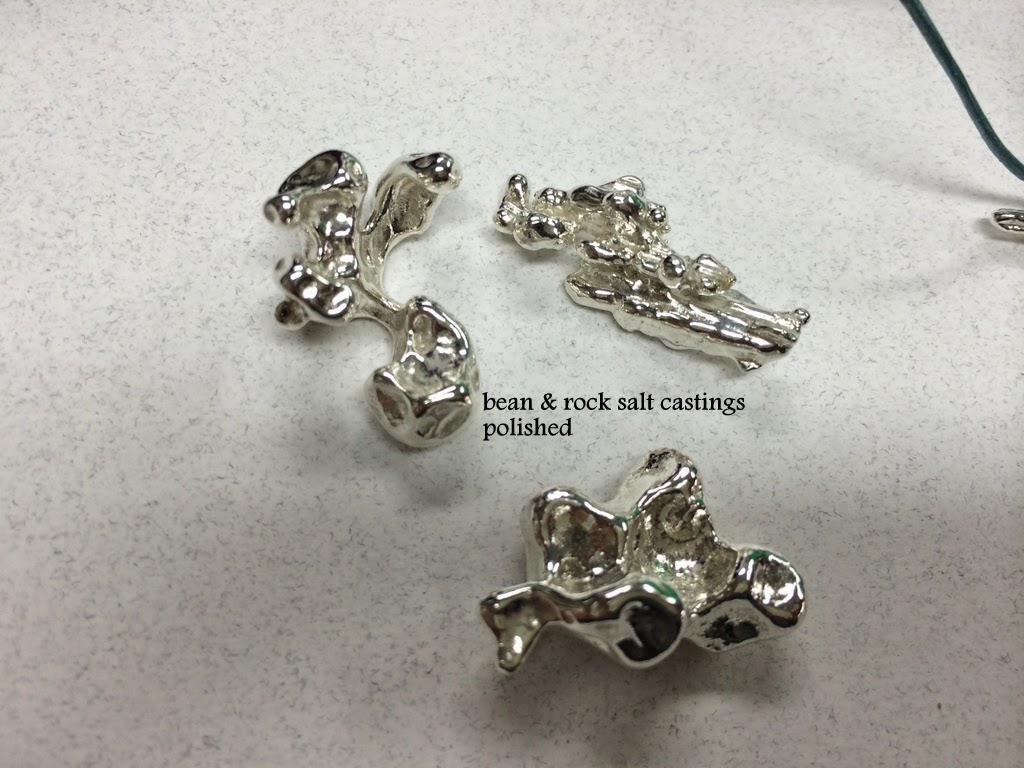 Add a little borax (flux) every time you melt metal.  From what I understand, this fills any cracks in the glaze.

It can be worn on either sides to change the look. 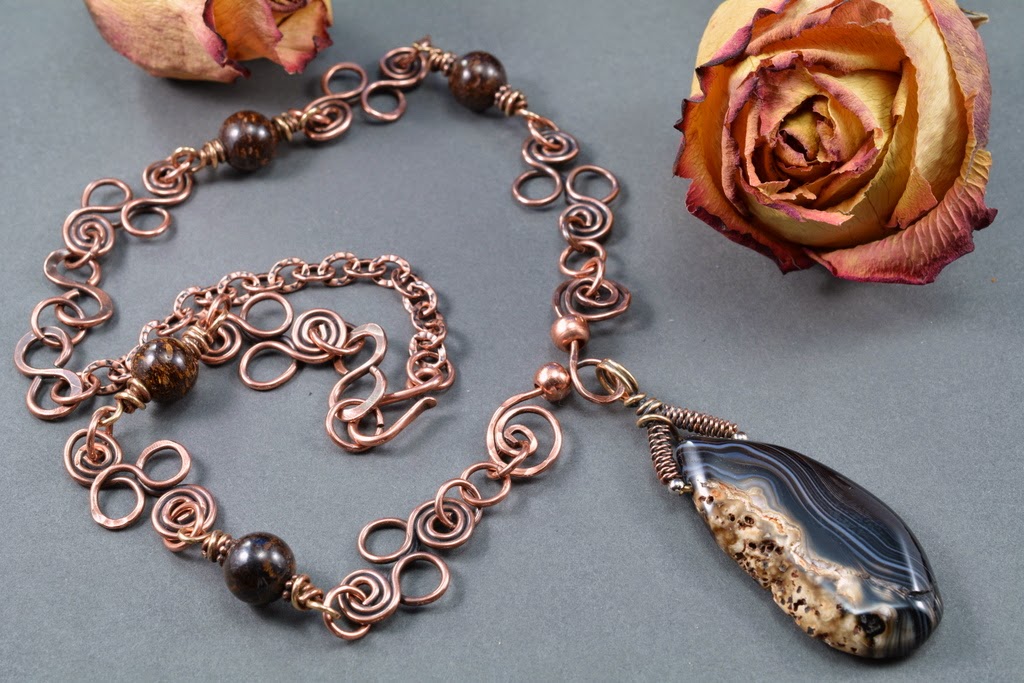 The links, clasp, and bail are all handmade using copper wire. 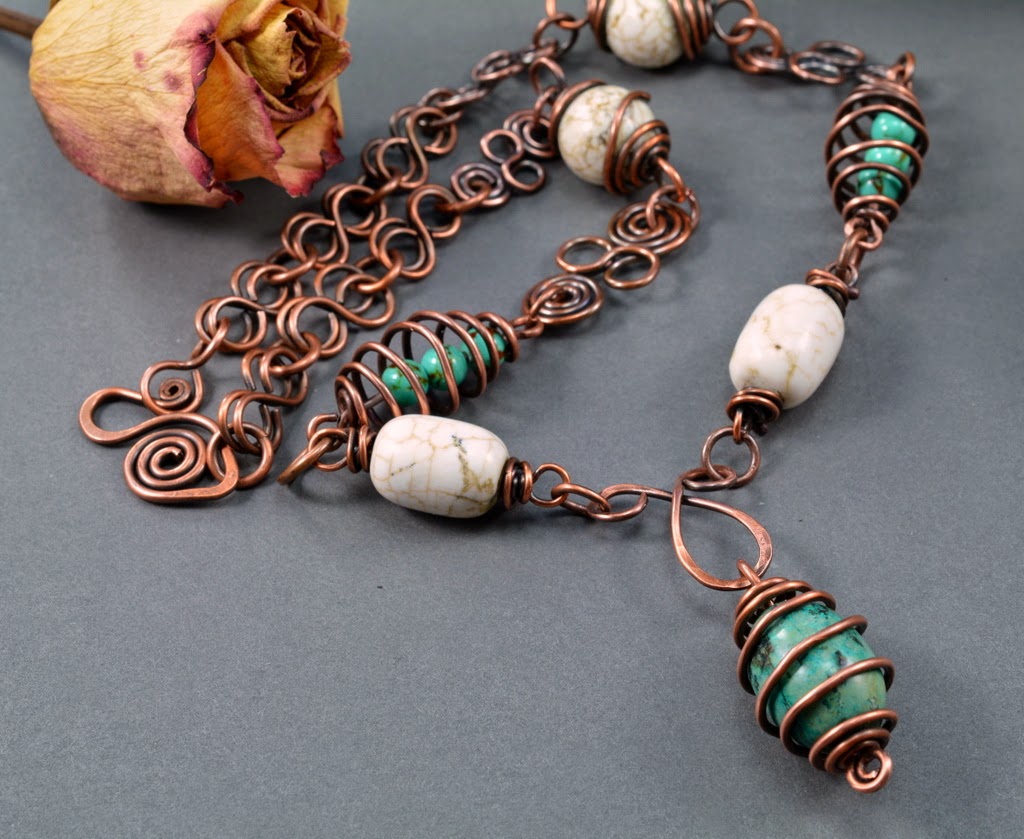 Red Jasper with Picasso Beads
with double coiled copper beads.
I like it when the whole piece is handmade, including all the links.
Another example of how you can create beautiful components and links using wire. 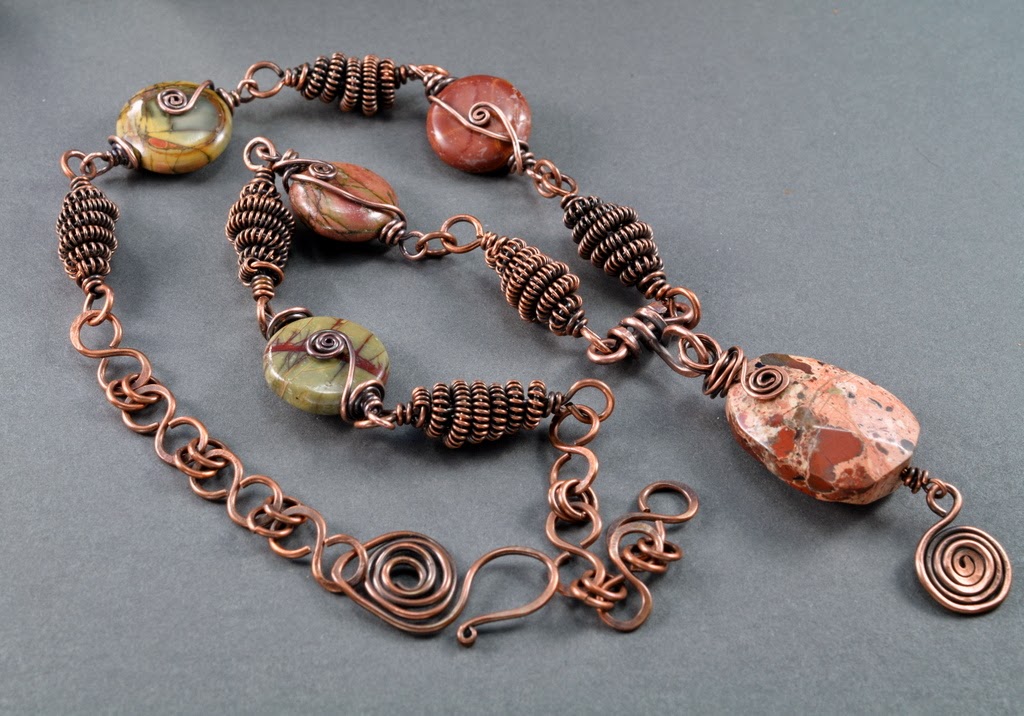 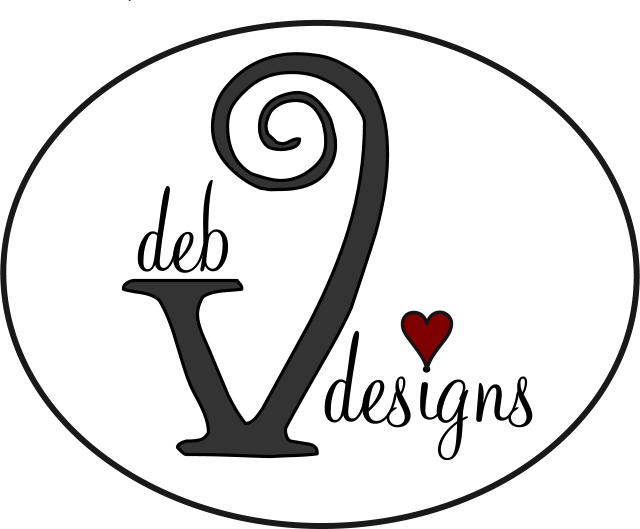